Securities investors pour billions of dollars a day into market 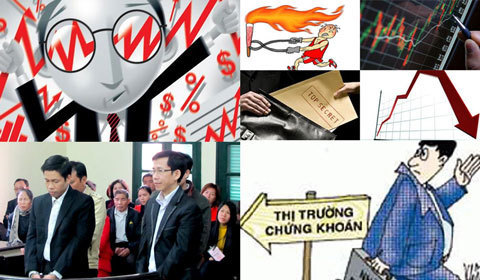 Billions of dollars are pouring into the stock market each trading session as the prices of some stocks have reached historic peaks.

The stock market is witnessing unprecedented cash inflow with VND52 trillion worth of shares transferred on November 3 amid extremely high demand and heavy profit-taking pressure.

According to MBS, over 1 billion shares were transferred on HOSE each trading session in the first three sessions of November. The liquidity reached a record high, but the market also witnessed a new structuring and orientation.

As many as VND130 trillion worth of shares were traded on three bourses, including VND100 trillion on HOSE (HCMC Stock Exchange), with most investors from Vietnam.

Vietnam has never seen such a big cash inflow to the stock market before. It was even higher than the historic trading session of August 20, when Covid-19 complicated developments in Hanoi and HCM City raised fears among investors. The profit-taking pressure and the sell-off wave then caused the VN Index to lose 45 points. At that time, the high bottom-fishing demand helped liquidity reach the $2 billion per session threshold, for the first time in history.

The strong cash inflow into the stock market is predicted to continue in the upcoming days as the Ministry of Planning and Investment (MPI) is considering a huge VND800 trillion bailout. Meanwhile, idle money is profuse and other investment channels prove to be less attractive.

Deposit interest rates are very low, while the real estate market is bustling in only some areas and the gold price has not increased.

According to Nguyen Duy Hung, President of SSI, in the first 10 months of the year, people injected another VND68 trillion into stocks, a huge figure which showed investors’ high interest in the stock market.

Securities have become a new stable investment channel, and there are signs showing that the stock market is no longer a market for small groups to surf on investments.

The strong cash flow into the stock market has set many records. The VN Index even exceeded the 1,460 point threshold in late October and early November. The cash has been going to the shares which have not had sharp increases. UpCom has attracted cash flow, witnessing nearly 100 stocks hitting the ceiling price increases of 14-15 percent per trading session.

The rise of the stock market has brought high profits to investors. Many shares have increased sharply in prices, helping their pockets grow rapidly. There are stocks which have increased by seven times just after two months, while other stocks have seen prices double and triple just within a short time.

The real estate share prices are escalating, reaching the 7x-9x levels. Some stocks have increased by hundreds of thousands of dong per share.

These are all record-high price levels of shares in their history. Many shares of large corporations have exceeded the VND100,000 per share threshold, including real estate ones, such as PDR, THG, API and Dat Phuong.

Investors’ expectations of the stock market remain very high. The demand is high and idle money is plentiful. Securities companies continue to increase capital and banks also have expanded their operation scale. All these factors have led analysts to believe that the cash volume ready to flow to the stock market is very high.

Yuanta Securities has predicted that the stock market will reach a new peak in November, saying that the VN Index is likely to reach 1,534 points in November, while stocks with medium and small capitalization value will see the strongest breakthroughs.

According to Yuanta, the change in the strategy to fight Covid-19 from ‘zero Covid’ to ‘living together with Covid’ has brought initial economic effects: macroeconomic indexes in October all showed positive signs.

Vietnam’s PMI in October rose to 52.1 points from 40.3 in September. The total retail revenue of the country in October also increased by 15.9 percent over the month before.

Some securities companies put high expectations on a stock market boom thanks to the economy recovery program. They even predicted that the VN Index would rise to 1,700 points in the next 6-12 months.

Though the stock indexes have increased sharply thanks to high expectations, some experts have warned about a bubble in many shares.

According to HSC, the VN Index may reach 1,550 points by early 2022 before a big correction appears.

VCB Securities predicted that the VN Index may reach 1,500 points in Q4 before a correction of 100-200 points appears.

The new cash flow to the stock market in recent years is very strong, which could be seen in the opening of nearly 1 million trading accounts over the last two years. The amount of money in accounts at times has reached several billion dollars.