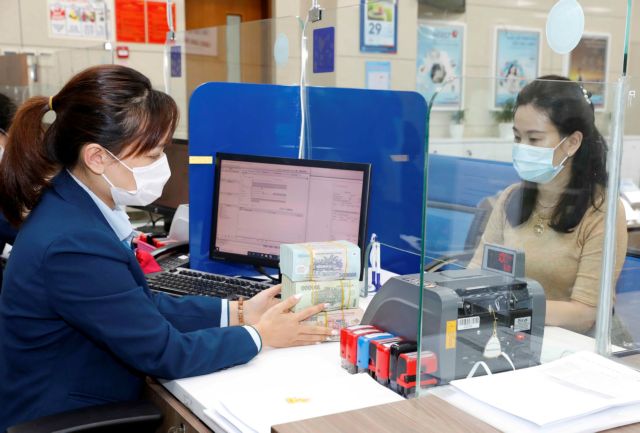 This is the first rate hike by the SBV since 2020, after the outbreak of the COVID-19 pandemic.

According to experts, the move is in line with current monetary market developments in order to avoid creating a significant management gap between Viet Nam and other economies.

Last week, the US Federal Reserve announced an increase in the central bank’s overnight interest rates by 0.75 percentage points to 3–3.25 per cent a year, its fifth rate hike in 2022. The Fed also affirmed that it would continue to raise rates and maintain them above 4 per cent a year after 2023 to curb inflation.

This has caused the US dollar to continue to appreciate strongly and break the 20-year peak in the international market, putting pressure on the USD/VND exchange rate and monetary policy management.

Nguyen Duc Lenh, deputy director of SBV’s HCM City branch, said that the SBV’s rate decision followed the global general trend. Many countries had raised and continued to raise interest rates to combat high inflation. Therefore, as an integrated economy with a relatively large degree of openness, the move to increase interest rates was objective and appropriate, he added.

However, the increase in interest rates will weigh on the cost of capital mobilisation at commercial banks.

According to the forecast of VNDirect Securities Corporation, the deposit interest rate may increase by 30–50 basis points from the current level in the last months of 2022. Thereby, the 12-month deposit interest rate of commercial banks will, on average, increase to 6.1–6.3 per cent a year by the end of 2022, but still lower than the pre-pandemic level of 7 per cent a year.

In a new report, Petrovietnam Securities Incorporated (PSI) said: "The SBV’s move indicates that the era of cheap money has ended and the interest rate levels in the future will definitely be higher."

Commercial banks’ costs of capital have increased sharply since the beginning of the year, especially in the group of small banks.

In addition, SBV reopened the Treasury Bill channel after freezing it for two years, withdrawing a large amount of money from the banking system to curb inflation.

The lack of liquidity in the system made the interbank interest rate sometimes exceed 6 per cent a year in the overnight market, higher than the 12-month personal deposit rate at state-owned banks.

Economist Nguyen Huu Huan said that while the Government and SBV have requirements to ensure the stability of lending interest rates, commercial banks would find ways to cushion losses such as collecting additional fees or requiring businesses to use other financial services of banks to get loans.

In fact, since the beginning of the year, lending rates have also shown signs of increasing at some commercial banks.

However, as there is often a lag between the hikes of deposit interest rates and lending rates, in the short term, the net profit margin of commercial banks is considered to be narrower compared to the previous period of cheap money.

While the credit room in 2022 has been largely used, PSI believes that the outlook of the banking industry in the last months of the year will not be as bright as the first half of the year.

With the central bank’s cautious approach to granting credit, it is likely that 2023 will also continue to be a less favourable year for the banking industry.

Amid the continuous rate hikes by the central banks, the uncertain trend of the stock market and the downtrend in liquidity, PSI recommended investors prioritise risk management, limit margin usage and reduce stock proportions in portfolios in technical recovery sessions.

For businesses with large investment plans in the future, PSI also suggested that investors should cautiously re-evaluate the potential of projects because interest expenses will increase sharply from initial estimates and prolong the payback period of projects. — VNS