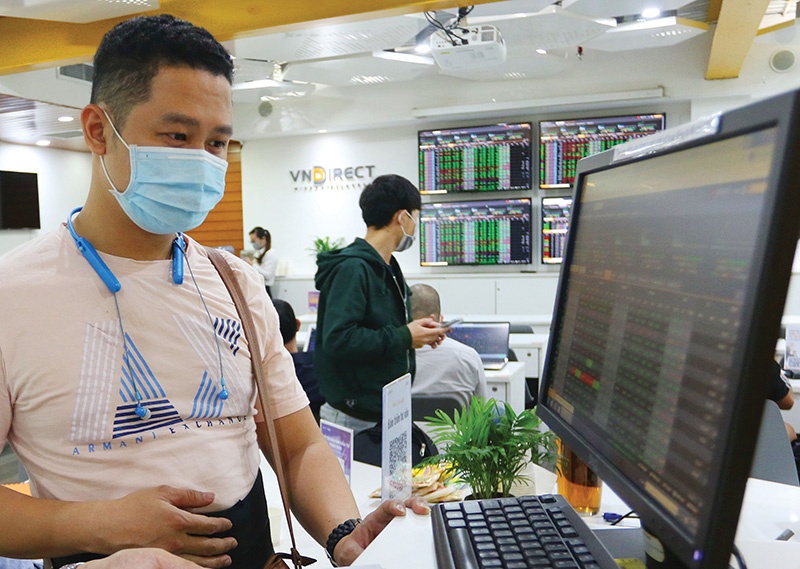 The near-term outlook of Vietnam’s stock market appears bumpy to some foreign funds, although positive developments are expected as the pandemic slackens, mirroring the recovery of other markets.

Since August, Fubon FTSE Vietnam exchanged-trade fund (ETF) has experienced net outflows of $94 million and, as of October 13, the size of the ETF reached around $489 million.

Previously, Fubon FTSE Vietnam was a strong net buyer on the domestic stock market, especially between April and July.

In mid-August, the Taiwanese fund was approved to raise an additional $180 million to invest in Vietnamese stocks. However, it has not yet attracted further capital.

Along with Fubon, a number of large ETFs on the Vietnamese stock market – such as DCVFM VNDiamond and DCVFVM VN30 – are also following suit.

Last month, foreigners remained net sellers with a value of around $365 million via order-matching transaction on HSX. Foreign ETF money flows were negative as FTSE and VNM ETF recorded net outflows of $57.4 million and $1 million, respectively.

Domestic brokerage SSI stated global cashflow is shifting from Vietnam to emerging peers with expertise in exporting raw materials such as crude oil and coal. On the other hand, a domestic ETF, the IPAAM VN100, was officially listed last week. However, the fund’s size is rather modest with around VND52 billion ($2.3 million).

In a broader context, amid loosening social distancing regulations and expedited vaccination programmes in major cities, market watchdogs expect the netselling pressure of foreign investors to decrease and Q4 business results to recover.

According to KB Securities, Vietnam’s stock market should continue to attract cash flows from domestic individuals. Although eased social distancing may cause a part of the cash flow to seek other investment channels, the brokerage believed that low interest rates, coupled with a brighter outlook of the macroeconomy and buoyant production, will keep the cash flow of domestic investors.

In addition, the capital flow in the market is also supported by the recent uptrend in the capital of securities companies, which helps raise the loan capital in the market and ensures the margin source in case of market volatility.

“Most of the stock markets we observed saw positive developments when the pandemic situation improved. For the Vietnamese stock market, we expect a similar scenario to happen in Q4 when the economy and business activities rebound, given supportive fiscal and monetary policies,” KB Securities noted.

However, it is unlikely that the social distancing regulations would be completely removed nationwide – or that 70 per cent of the population would be fully vaccinated in Q4. Instead, more loosened measures should be maintained to prevent resurgent COVID-19 cases, the group said, which means it remains difficult for the economy and production activities of listed companies to return to normal operations in this quarter.

Therefore, the main market trend in Q4 is recovery, but the possibility of a breakthrough is quite unlikely, KB Securities stated.

The slowdown in inflation and the divergent recovery of the US labour market have eased the pressure on the Fed’s raising interest rates. However, experts cautioned that the risk of inflation could increase again in the last few months of the year as broken supply chains have not fully recovered, and the demand for consumption increases after the pandemic, causing prices of all kinds of goods to rise – such as for iron, steel, and oil. Therefore, inflation is still a factor that needs to be closely watched and updated.

Nguyen Thi Phuong Lam, head of research at Viet Dragon Securities said, “External factors explaining the foreign net selling trend include tapered policy in the US that may raise concern for investors, but not at a significant level on a fundamental basis. However, short-term volatility is unpredictable. In the last three months of 2021, we recognise that the US tapering policy may still impact global stock markets.”

The policy previously caused sharp correction for emerging markets in 2013 when the Fed reduced its monthly quantitative easing purchases from $85 billion to $65 billion. Countries with large external financing needs and macroeconomic imbalances suffered the most from speedy currency depreciation and reversal of capital flows.

“Vietnam’s current situation is less worrisome as our foreign currency reserves are abundant at $100 billion, leading to a better position on managing exchange rates. Therefore, the impact on the VN-Index may not be as significant on a fundamental basis. However, short-term fluctuation is unpredictable given the volatile nature of the global stock market,” Lam told VIR.