Vinaconex Water Supply Jsc (Viwasupco) reported revenues of almost VND264 billion ($11.43 million) and a gross profit of VND151 billion ($6.51 million) in the first half of this year, a 57 percent gross profit margin.

It has seen steady growth since 2012 with demand for water rising as the Hanoi population surges with urbanization. Over the next six years its pretax profits almost quadrupled.

Revenues from supplying tap water last year were worth VND469 billion ($20.31 million), while pretax profits were over VND230 billion ($9.96 million). 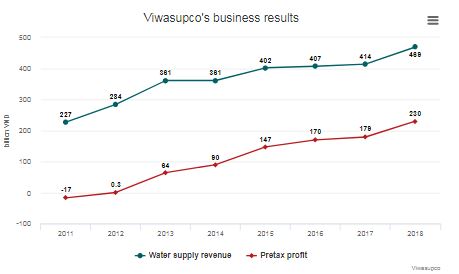 With an equity of almost VND1 trillion ($43.31 million), the company has a return on equity ratio of 24 percent, among the highest of any listed company. The figures are also far superior to any other water supplier’s in.

The company’s gross profit margin of 57.2 percent is higher than that of Ho Chi Minh City’s three water suppliers of 31-37 percent. 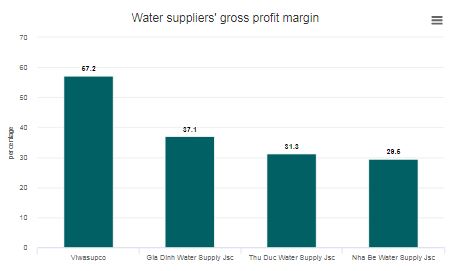 Viwasupco supplies water to the southwestern part of Hanoi comprising the districts of Thanh Xuan, Hoang Mai, Ha Dong, Cau Giay, Dong Da, and Nam Tu Liem. It sources water from a tributary of the Red River in the northern Hoa Binh Province.

Last year it supplied almost 250,000 cubic meters of water a day, with consumption rising by almost 22 percent year-on-year in the last quarter, enabling it to exceed all targets.

On Tuesday, Viwasupco cut service to parts of Hanoi to clean its pipes and reservoirs after its water source was contaminated by used oil, affecting more than 250,000 families or around one million people in the capital city. It resumed service on Tuesday without any assurance on water quality.