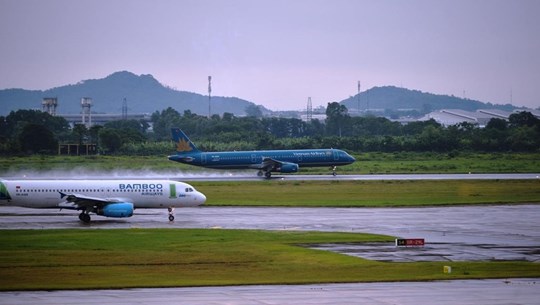 As Typhoon Noru has abated into a tropical depression, Vietnam Airlines has resumed flights to/from some airports in the central region.

It will also increase flights and put wide-body aircraft, including Airbus A350 and Boeing 787, into use to swiftlyserve passengers affected by flight rescheduling.

According to preliminary data onSeptember 27 afternoon, up to 150 flights of Vietnam Airlines were cancelled oroperated earlier or later than scheduled, including 148 domestic flights andtwo international ones with nearly 14,000 passengers in total.

The firm said passengers of theNoru-affected flights will receive assistance in line with regulations, addingthat it will update any changes caused by bad weather on its social network fanpageand website, or via text messages and emails sent to passengers.

The Civil Aviation Authority ofVietnam has decided to reopen nine of the 10 airports previously closed inresponse to Typhoon Noru. Only Dong Hoi Airport of Quang Binh province is beingmonitored to consider the reopening time./.